During the last IRL Yard Reading Circle you mentioned "sitting" for six years. What prompted that situation? What did you discover about life during that time? How does the experience inform your work?

I began sitting at the end of my first year at college, which followed my daughter’s birth during my senior year in high school, and my marriage the year after that. I had been cruising along, my next five, ten years planned out, when two things happened. First, my marriage ended. Second, I found myself preferring English courses, and the humanities in general, over the math courses that were required for the career path I imagined since grade school: engineering. These changes caught me off guard and imagining a new future was too much to bear. I was thrown into a deep depression. Everything that I did was off. Every decision came from a place of panic and fear and uncertainty, which forced a reckoning with my selfhood. Each move seemed to dig another hole I had to crawl out of, like I was in quicksand. Hence my motivation to sit, and let it all pass.

Working up to being able to sit still was a years-long process. I stopped going to the barbershop. I left school. I was reading King James versions of Genesis and Exodus and Psalms and Proverbs and Song of Solomon, The Rigveda, the Tao Te Ching, learning about monastic leaders, groups, and practices. I went hard, literal, Song of Solomon style. I’d breathe, track my breaths in and out while asking for wisdom. I became at ease enough to sit for hours at a time. I was feeling light. I was losing jobs, apartments, and was hopping from one spare room or couch to the next one while maintaining my new sitting routine. I’d spark an incense stick and sit until I was able to let go of my shoulders. I had never felt better.

When I had finally lost everything, I was liberated from the stress of trying to manage all of it. I was empty, like a house plant who didn’t need to worry about anything but living. Free from panic and fear and uncertainty, I had gotten to a place where I could move things around. If there was a question I had, I asked it, breathed and sat, knowing that if I lingered on light alert, I’d receive an answer. If I wanted to talk to someone, I’d think about them and we would eventually cross paths. I’d be blown away when they’d say they too, were thinking about me. I witnessed the most amazing random acts of kindness delivered to me by strangers during that time, and because I stopped sitting after those six years, have not seen any of it since.

It sounds very gift card-ish. But intellectualizing the experience and experiencing it are not the same thing. Given the time and energy commitment, not many — neither the evangelists nor the skeptics —have experienced what occurs as a result of such a sustained mental and physical routine. Writers sometimes advocate meditating for health reasons, but they rarely talk about the way meditating can help you manifest mental practices into physical realities.

Let me be clear. I’m not religious in any kind of traditional sense. I don’t believe in any dogma in particular. I’m a writer because I believe in the power of imagination to create a new reality, take you anywhere you want to go. Sitting trained me to recognize that the world in which we live is made of fictions. Civilization is the fiction that makes community-building possible, that enables us to have shared values and goals. As a writer, I choose to be one of the people who is creating fiction rather than just consuming it. I am especially inspired by writers whose fictions improvise with facts and complicate our understanding of what we know — E.L. Doctorow, Hilary Mantel, and Maaza Mengiste have all been on my mind. I’ve been reading and influenced by Gaston Bachelard’s Poetics of Space. Lately, I have also been discovering the work of fictionalist philosophers like Tamás Demeter and Gideon Rosen.

I’m currently working on several projects. The most important is an ambitious body of work — including my novel Canebrake and related drawings and short stories, such as “Morning Run” — sited right at the limits of representation itself. Inspired by my experience with sitting, I’m writing about that which cannot be transmitted intellectually or conceptually. How do I write about knowledge that can only be attained by going through it, when one would be better off taking someone by the hand and asking them to come along for the experience, knowing that even that is only the leading the horse to the water? What I’m really interested in is: how does one attain knowledge?

Within spiritual science there is a good deal of conversation about the transmutation of energy. How does this principle relate to the idea of flying as expressed in your story?

I’m a fiction writer. As research, I metabolize ideas from many different sources, including spiritual science, to invent settings and characters and decisions that resonate with people’s beliefs. I am aware that some thinkers believe energy can shift from one form to another. I hope that readers, whatever their experiences and convictions, will find different points of connection with my work.

I notice a lot of artists attempt to handle metaphysical ideas to throw light on the need to decolonize them. But I question whether this simple substitution—pull back the yoke of Enlightenment thinking in order to begin to think about the metaphysical, replacing one with the other — is enough. Making your work about flying is not the same thing as learning to fly. With Canebrake and “Morning Run” and related works, my struggle is writing about literal flight. In other words, this artwork is not as good as — although it attempts to shine a light on — the real thing. The wafer and the grape juice is not the same thing as putting in the work to turn water into wine. This is why I do not describe the flight that occurs in my fiction as a metaphor.

How do you describe power? What is your personal relationship to power?

I see power as a source, meaning that another would be hard pressed to take it away from the one who truly has it. Someone might steal your stock, but anyone with true power is sitting on the location from which the supply springs.

During my sitting years, I gave away energy freely. People need constant charging, so I gave it to them, or they stripped me of it. At any rate, it was always a casual exchange because I had an endless supply. I knew how to refill myself. These days, not so much.

I cursed a man out at the bagel shop last week when he told me that the bathroom was for customers only. I was standing on the line with my wife at the time, preparing to order bagels and drinks. His insinuation, delivered through tone, was rude, racist. I went from zero to ten quick, and felt good about it. I attempted to regain what he stripped from me. But my need to prove something by belittling a food server, stressed by the pandemic, came from a place of weakness, powerlessness. I say this not to excuse his racism, but to explain what I believe power is, and what it is not.

What is it that carries one? What or who gives the African man or woman the ability to fly? Surrounding what Duke has accomplished, you mention “adrenaline”, having “the right ingredients”, it being a learned ability, and it being inherited from previous generations — which of these is the key to flight? Or is it all the above? Is there a connection between them all? Is the key to flight important for us to know, even now, in this time?

I imagine that the answer to this compound question is all of the above. The truth is that I don’t know. In the model I have created, experience is the thing that carries the one who flies. In order to test the potential for truth in this proposal, I am always playing around with the relationship between what we learn, what we absorb from the environment, and what we inherit biologically. I am especially interested in how all of these are factors we cannot control during our formative years. I think a lot about the fact that learning does not require consciousness — it’s so easy to naturalize early learning and mistake it for biological inheritance. Culture is learned. No one is born with it, but people speak of it as if this is the case. People say, “Look at how we walk” or “look at how they dance” or “sing” as if the singer didn’t have to go through the practice.

Arthur Jafa’s Love is the Message, The Message is Death is currently making its way around the internet, and I think that it is easy to make the mistake of naturalizing the expressions that are depicted in this amazing work. The risk is that we dismiss the exhibition of learned intelligence by falsely associating these specific cultural vocabularies with abilities that black people are born with. In my current project, I suggest that if there is a knowledge of flight, I imagine that one has to learn it. It can be shared with the uninitiated by another who possesses this knowledge, or it can be self-taught, but either way one has to put in the work and the time.

What are “the right ingredients”? Does you consider this a matter of character or ritual practice?

In “Morning Run,” I give readers a glimpse of an elder who has trained others in the knowledge of flight and a young individual who flies without this training. In the story, I mention biological inheritance to evoke existing arguments regarding the ties that bind African communities throughout the diaspora. These ties are not automatic. Nor can knowledge of flight be realized by empty ritual, though routine and rigor are important ingredients for transcendence. Characters who are determined, and committed, and trust the process can gain the ability to fly. 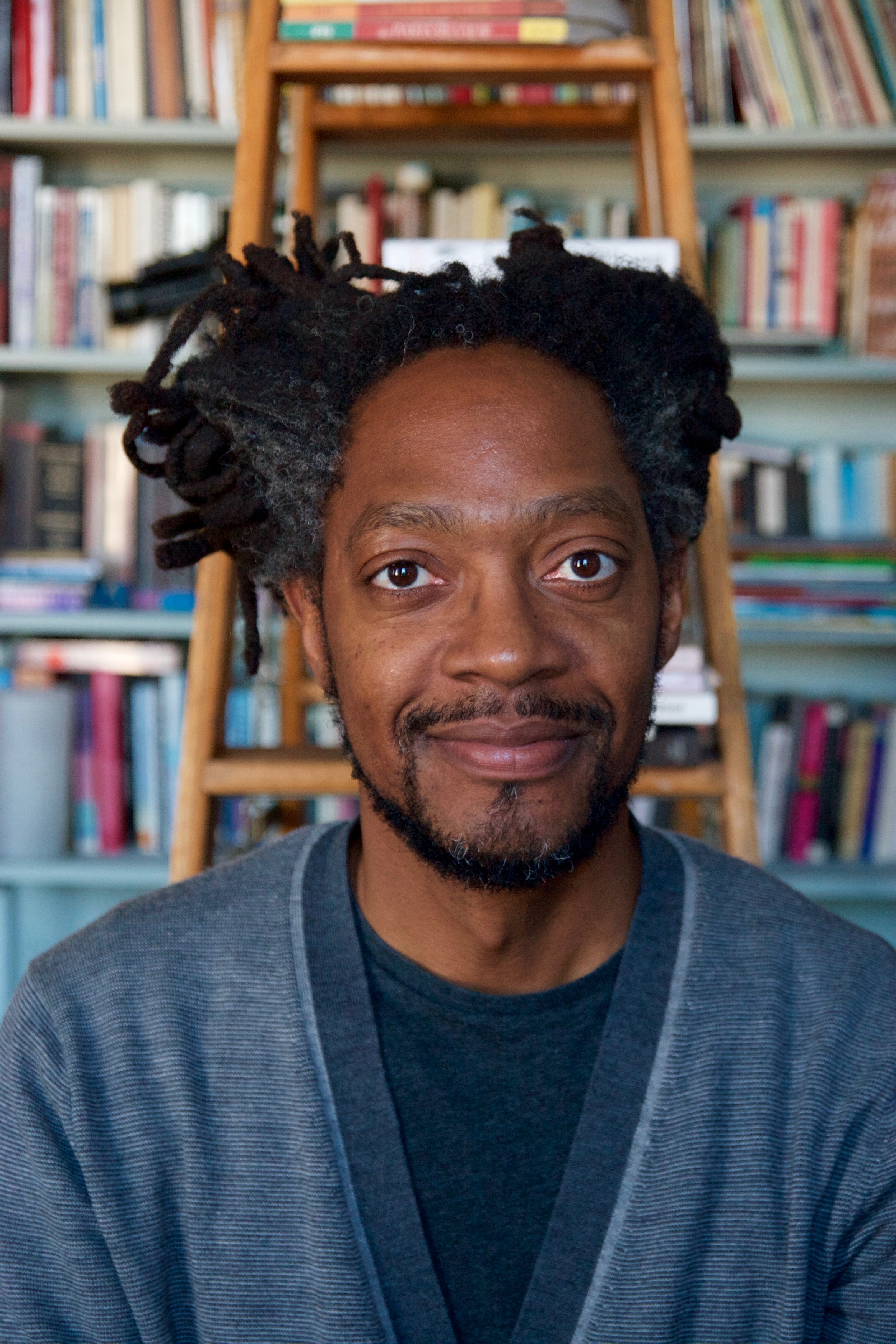 Quincy Flowers is a writer, who lives in Brooklyn, NY. He holds graduate degrees from creative writing programs at the University of Houston and NYU, where he received a New York Times Fellowship. Most recently, Flowers launched At Louis Place, a home for fiction, which is to say that it is a home for forging truth, where workshops, conversations and happenings create space for experimentation with the real and the possible. It is founded as a community-based alternative to traditional, craft-based writing schools, and serves its neighbors in Weeksville, Bedford-Stuyvesant, Ocean Hill, Brownsville, East New York, and beyond.